From Mages of Mystralia Wiki
Jump to: navigation, search

Spells are one of the core elements of the game Mages of Mystralia and players will control Zia, who was exiled for her magical abilities. On her journey through the world of Mystralia, she'll discover new spells and meet other mages.

Spells have three key components: the Focus, the Essence, and supporting Runes.

Allows for instantaneous spells, such as slashes and explosions.Basic Immedi spells infuse a wand or area with a short-lived burst of energy. Immedi, or "melee", spells are easy to use, with notable runes including Detonate.

Allows for spells with conditional durations, such as mines and projectiles.

Basic Actus spells summon stationary orbs of an element. Actus, or "active", spells are incredibly flexible with a large pool of compatible runes, often including Move and Homing.

Allows for spells with a durable effect, such as ice bridges and fire walls.

Allows for spells affecting one's self, such as shields and fast movement.

Basic Ego spells provide a durable, front-facing shield. Ego, or "self", spells have great utility with Move or Duplicate, and make a strong foundation for triggering other spells.

Obtaining
When Greyleaf is burning down and Zia helped all the citizen escape, Tao gives her the key to the mineshaft. Proceed through the mineshaft and meet Blasius the Sage of Aura. He'll give you the power to change all Spells to Aura Element.

With a thought and a spark, Igni spells light the torches on Zia's journey.

Obtaining
After defeating the Final Boss in the Lava Grotto Zia meets Flavius, the Sage of Igni. He gives Zia the Essence of Igni.

Using the elements of cold and ice, Aqua spells bridge bodies of water through a Creo focus.

Obtaining
After defeating the Final Boss at the Sunken Query Zia meets Caelius, the Sage of Aqua. He gives Zia the Essence of Aqua.

Acting through the earth and nature, Gaea spells protect Zia from hostile elements.

Obtaining
After defeating the Final Boss in the Old Mines Zia meets Drusus, the Sage of Gaea. He gives Zia the Essence of Gaea.

While spells can function with just a Focus and Essence, Runes separate the legendary mages from the novices. Experienced mages use their creativity and wit to adapt to any situation.

These are just some basic spells discovered by playing the game. There should be much more possibilities. It is possibly to clear the game 100% with those but feel free to add spellvariantions anytime.

It can be attached to each spell to add burning, chain attack, freezing, knockback effects. 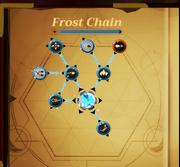 A set of chained spells that can destroy entire packs of enemies with a single cast.